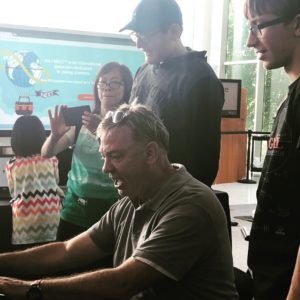 A father playing his child’s video game he created for Global Game Jam Next 2018.

How do you tell your parents that you want to become a game developer? Making any kind of long-term commitment when it involves your career is always a tricky subject. This is especially true if game development was not a career choice back when your parents were deciding what they would like to do for a living. Whether it was a different era or different culture, your parents might not be exposed to this industry. Having this conversation can be especially difficult if they were around for the Great Video Game Crash of ‘83, which may be their only impression of the video game industry.

Before you try convincing your parents, be sure to consider whether you have fully convinced yourself. There are hundreds of ways to break into the industry, but the way you decide to pursue it as a career must make sense to your lifestyle. Watch documentaries or the behind the scenes of how some of your favorite games were made. Read how successful college graduates found their path into game development as a career. This is all great material to help prepare you for the long haul.

What is your parents overall impression of video games? If they feel strongly against video games, ask them what they don’t like about it. For any medium of entertainment, there is a book, a movie, a video game for everyone. Think about what your parents would want to play. If your parents have a competitive side, introduce them to some multiplayer games. If your parents want to immerse themselves in a story, show them a story-driven game they might like. Maybe your parents have a tight schedule and don’t have much time to play a full-length adventure game – show them what kind of mobile games are out there, or games that aren’t as time-demanding on console or PC.

Now that you’ve done some research on what kind of games your parents enjoy, think about that game in terms of development. Chances are, you have already dabbled in game development. Whether that was through modding one of your favorite games, or using a tool like Unity to create your game. If your parents already happen to be gamers, then maybe they need to see how far you are willing to take your game developing hobby. If they aren’t gamers, how open would they be to playing a game if it was created by you? Perhaps all it takes is for them to see how serious you are about making it into a career, so why not create a game that they would like? It doesn’t have to be perfect, but it has to show that you’ve put some real effort and thought into it. Ask them what you could do to improve the game – which is a process of questions you’ll be going through your entire video game career.

Meet somewhere in the middle. 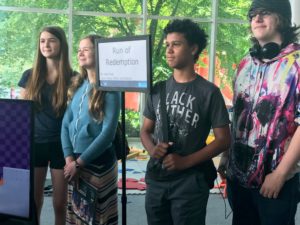 Middle and high school students showcase a game they created at Global Game Jam Next 2018 at the Pacific Science Center.

If you aren’t sure how to start with the do-it-yourself approach, there are plenty of other ways to test the waters. Look into introduction courses or summer camps to help ease their minds before you decide to make the challenging and financial commitment that is required for a college-level program.

By showing your parents that you enjoy creating games as much as playing them, it shows them that you take it seriously as a career and that you want them to take you seriously. Plus, it makes for a great portfolio piece if you’re looking into applying at a game development college.

A steady and growing market.

According to ZipRecruiter, the national average salary of a game developer $123,649 a year. As of 2018, CNBC quoted that the video game industry is projected to be worth $138 billion by the end of the year, and the market is only going to get better over time. If you’re still in school, think about what classes you could sign up for that will teach you how to create your own games.

Pursuing a career in game development is viable choice, as long as you stay committed to that goal. Show your parents that you are capable of creating games yourself, and that you’d like to create games as a career, then the conversation doesn’t have to be a pain. The discussion that you’ll have with your parents becomes more of a clear and decisive plan for the future.